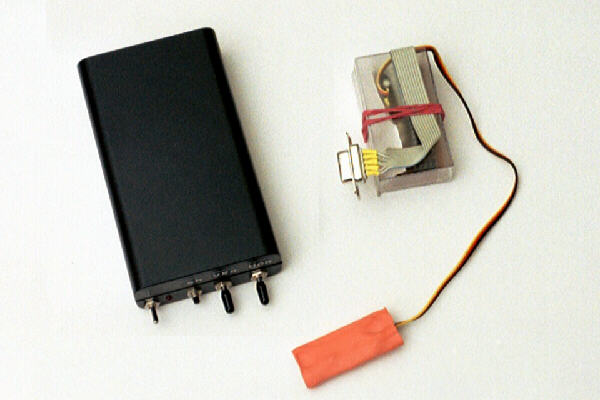 For radio frequency transmission I bought HF modules (one transmitter and one receiver) from a german electronic supplier (ELV). These small modules are working with modulation ASK on the frequency 433.92 megacycles. The bandwidth of the transmission signal is from 500 cycles to about 2400 cycles. To get a continious change of the signal level I use a pulse width coding for the data to be transmitted. For encoding the signal information for the transmitter and for decoding the signal information of the receiver I use both times a microcontroller ATMEL AT90S2313.

The microcontroller for the transmitter detects information from switches and a buttom. Only if a switch or the buttom is pressed it starts to send synchronization packets and data packets with the control information. The data packet includes an identifier and a checksum to reduce trouble with other radio systems. Sending a synchronization packet and a data packet is repeated as long as a switch or the buttom is pressed.

The microcontroller for the receiver detects the transmitted signal and decodes the data packet. If the identifier and the checksum is valid, the microcontroller starts to send pulse width packets to the servo modules.

The size of the selfmade receiver module is the same as the receiver of an usual receiver module for RC models. Both are installed to the rig or to a RC model with a 9 pin connector and so I can easily change the radio system I want to use or the rig/model I want to use. Years ago I saw this technic in a rig by Peter Bults.

The advantage of this selfmade radio control system is not only the smaller size. There is a more efficient use of the battery capacities, too. The transmitter is transmitting only if a switch or the buttom is pressed. The receiver sends puls width signals only to the requested servo modules if a transmission is active.

There are some disadvantages with the radio modules. The antenna is a loop on the print board. Therefore placing the receiver inside the rig made of alloy the useable distance is too short. So, only the microcontroller is in the receiver box. A cable leads to the small print board to the HF module with the receiver outside the rig. 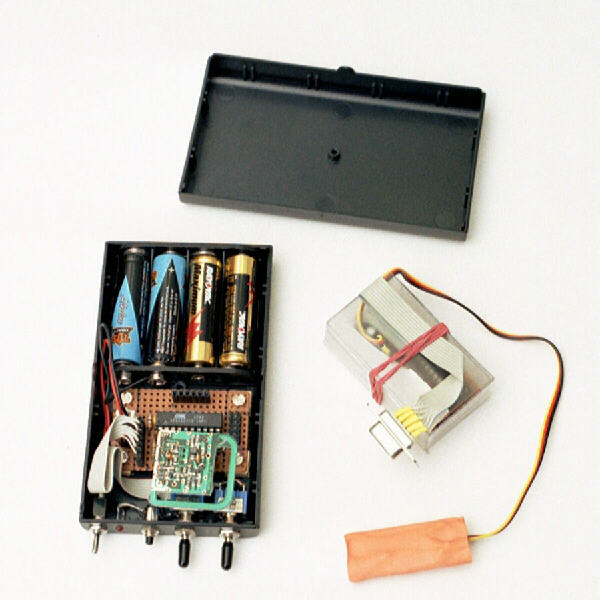 In october 2003 I used this system first time to make aerial photos. The used distance was about 30 metres. The remote system worked fine.


(September 2004)
Based on the evaluation system, I made new parts for transmitter and receiver with some modifications: